There are many methods to shaping, forming, and joining metals. Two metal forming methods that have similar concepts but are used for very different applications are swaging and crimping. Both swaging and crimping are “chipless” methods to metal forming, they displace the material by sheer force rather than cutting it away, so there are no wasteful scraps. Each method can also be completed as either a hot or cold process. While the final product of both swaging and crimping can require two pieces of metal to be joined together, the way in which each method accomplishes this and the application for the finished product are quite different.

Crimping is a method of joining two metals together that is often accomplished with a hand-held tool. When crimping, two metals or metal and plastic are forced together with a single compression force. The area that is compressed becomes deformed with a divot and thus is no longer cylindrical. For example, crimping is used in the electrical industry to keep wires organized and to fuse wires together. Electricians will use a crimper tool to crimp a fitting on wires to connect them to another wiring component or to other wires. Crimping is used when weight requirements are not a concern. Although crimped pieces should hold together when tugged on, they are not meant to support heavy weight. The crimping processes is mostly used for smaller applications and is often done while performing another task – such as completing the electrical wiring for a building.

On the other hand, swaging is a metal forming method that requires application specific machinery. Swagers are capable to handling a wide size-range of applications. Some swaging machines are so large that they have the capacity to shape tubing with a up to a 6-inch diameter, while other swager models are much smaller and can fit on a tabletop or workbench. Different from crimping in many ways, swaging is the process of shaping metal (forging) by a series of multiple very rapid, blows delivered by rotating hammers and forming dies around a piece of work. Swagers are used for small and large-scale assembly applications where a fitting is set over a wire cable, then inserted into the swager dies and the forming force of the hammer action produces a single completely assembled piece. When swaging is used for an assembly application, the two metal pieces are compressed with such force that they are conjoined and essentially bonded together. Swaging is used to create wire rope because after fittings are applied the swaged cable can lift and hold thousands of pounds. Swaging ensures the assembled product has a strong pull-force. When swaging for the purpose of an assembly application, a circular shape is kept around the cable. This is important for processes within the military industry because their applications require tight tolerances. Swagers are also commonly used for cable wire assembly applications in the sailing industry for rigging equipment, and for architectural cable railings and recreational ropes course cables.

While there are many more uses than discussed above for both crimpers and swagers, the application often determines which metal forming method should be performed. The crimping of wires and fittings is used for simple and small-scale electrical applications that require two wires to connect, but not to hold or lift weight. Using a hand-held tool does not forge the metals or plastics to the wire enough for them to be weight bearing. For applications where pull-force is a consideration a swager will often be used. Swaging machines are stronger than crimper tools and can perform many applications other than assembly, such as various end forming applications, as well as tube and rod reducing. 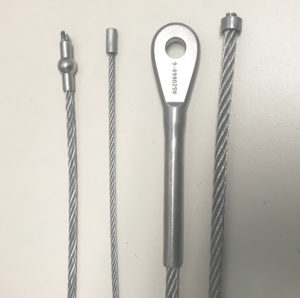